Alive and Innovating: The Arts in Arkansas

Alive and Innovating: Virtually There & Sounds of a Moment with SoNA

The Momentary and the Symphony of Northwest Arkansas (SoNA) collaborate to bring music to you.

If nothing else, 2020 gave all of us reason to explore a virtual experience of the arts. Some arts organizations have taken virtual delivery of their programming to the next level. On november 21, The Momentary and the Symphony of Northwest Arkansas (SoNA) collaborated to present Virtually There: Sounds of a Moment with SoNA from the Momentary’s Fermentation Hall, a state-of-the-art black box theater. A Q&A with three of the featured contemporary composers followed the show. The broadcast was free and streamed via Facebook and sonamusic.org. 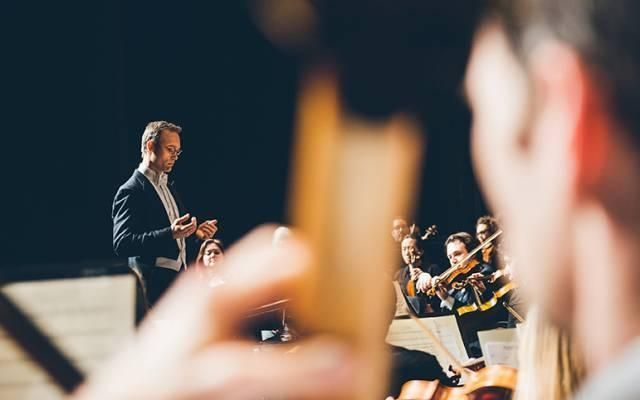 Sounds of a Moment is part of the Momentary's “Virtually There” series that takes audiences into the homes, studios and lives of artists from around the world. Spanning different artistic mediums including dance, theater, and music, the series not only showcases artists’ works but also presents opportunities to engage in conversation with them – all virtually.

Check out more about Virtually There: Sounds of a Moment with SoNA at the following links:

The Symphony of Northwest Arkansas (SoNA) is the new name for the North Arkansas Symphony (NASO), which was founded in 1954 and has provided over 60 years of musical performances and educational opportunities. Presenting classical and pops performances across Northwest Arkansas, with an annual combined audience of 20,000, SoNA is a resident company of Walton Arts Center.

SoNA exists to lead audiences in an exploration of universal truths and beauty, through musical performances of uncompromising quality.

The Momentary is a new contemporary art space in downtown Bentonville, Arkansas, for visual, performing, and culinary arts. The space serves as a gathering to relax, work, eat and drink, and discover art through programs, exhibitions, festivals and more. The Momentary is a satellite of Crystal Bridges Museum of American Art.